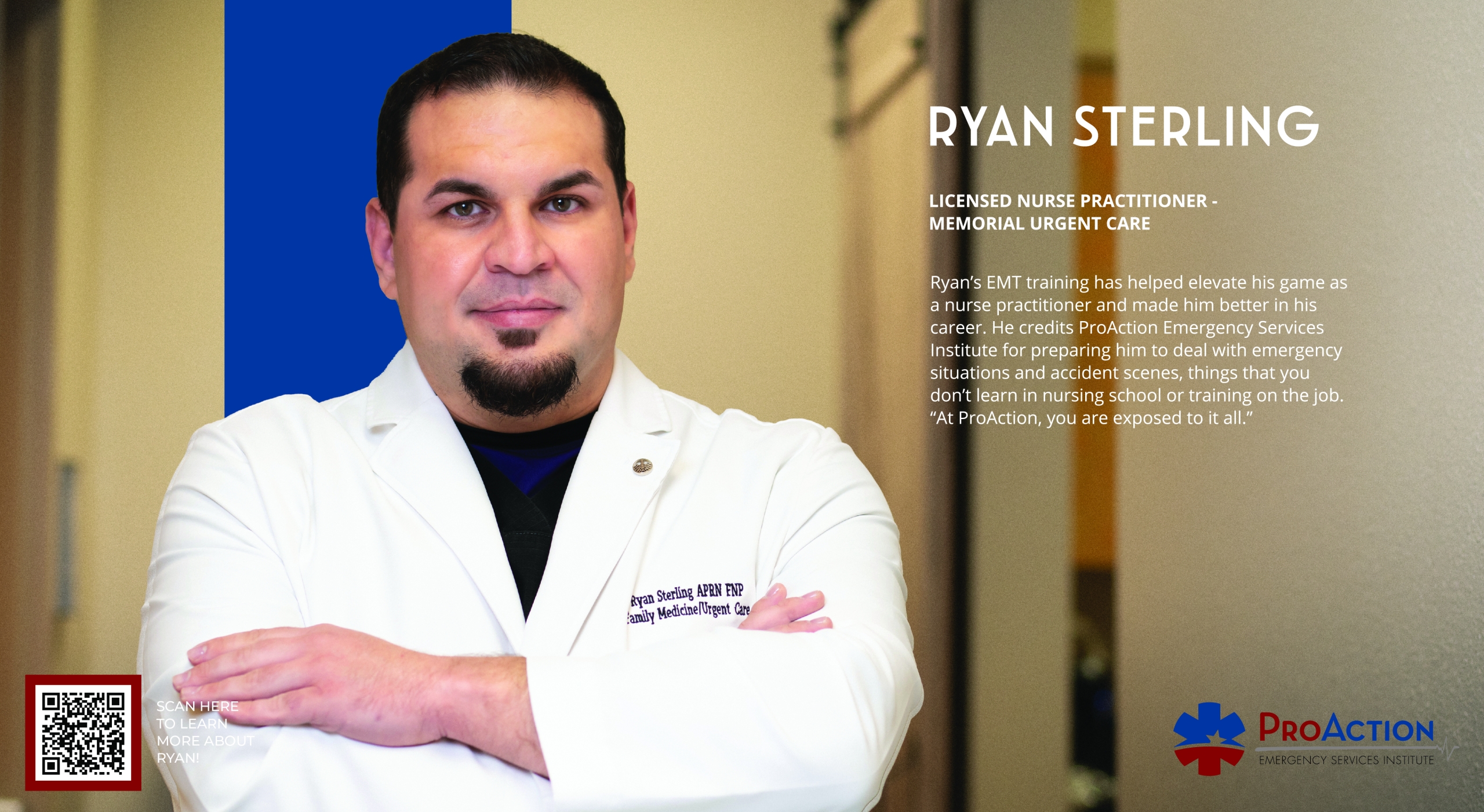 Imagine that it’s a very early morning in the hospital emergency room on Thanksgiving Day. The staffing is short because of the holiday and suddenly, a very pregnant young woman is admitted because she’s about to have her baby.

“I was on duty that morning, working with a skeleton crew and no other staff was immediately available to help with the young woman’s emergency,” says ProAction alumni Ryan Sterling. “I ended up having to deliver the baby myself. I ended up really relying on the EMT training I received at ProAction about delivering a baby.”

Ryan says his ProAction training just kicked in like he had been trained.

“It happened so quickly,” he recalls. “I had to put her on the bed and then I saw the baby was crowning and was further along than anyone expected. After she delivered, I put suction into the mouth and nose of the baby to stimulate it, then I got blankets to keep the baby warm, then cut the (umbilical) cord and completed the procedure.”

Ryan, who is now a nurse practitioner at a regional hospital, says many of the things he learned in his training at ProAction aren’t always covered in nursing programs or other medical training.

“A lot of what we see in emergency situations, either at the scene of an accident, in the ambulance or in the emergency room itself, aren’t always covered in other training,” he says. “At ProAction, you are exposed to it all.”

Ryan’s interest in the medical field began when he was in high school. He began training as an EMT at ProAction before he turned 18 and then joined the organization as a volunteer after successfully completing his training.

“I was always attracted to medicine,” he says. “I knew I wanted to get my EMT certification, then become an EMT nurse and then a nurse practitioner.”

Ryan says when he started looking for somewhere to start his training, ProAction was one of the few places offering such opportunities.

Asked what stands out about training at ProAction, Ryan quickly points to the professionalism of the staff. He says one of his instructors, Aileen Kalt, became good friends during his training. Afterwards, both he and Kalt became nurses and ended up working in the same emergency room together.

“The experience I got at ProAction really helped shape me and I was blessed that I had so many amazing instructors,” he says. “When I’m in between a rock and a hard place in some situation, I think about what they would do. They have good morals, a great education and a foundation that I was able to build off of.”

He says the instructors at ProAction “have had real-life experiences at the accident site, in ambulances, and in the emergency room.”

Ryan says that some training he got at ProAction has come in especially handy when dealing with drug overdose situations. He says at ProAction, they learned to deal with drug use “on the streets,” including learning the “language” of the streets and the drugs.

“You have to understand what they’re talking about on the street,” he says. “You have to be able to relay that information to the emergency room nurses and doctors in terms that they understand.”

He says, for example, that users on the street have different names for cocaine (double dandruff) and mixing heroin with other drugs is known as “speedballing.” And chronic drug injectors who can’t find a vein to inject do something called “skin popping.”

“These are things nurses and doctors might not know about, so we have to help them know what’s going on,” he says.

Overall, Ryan says his training and experiences at ProAction “shaped me” and made him better in his career.