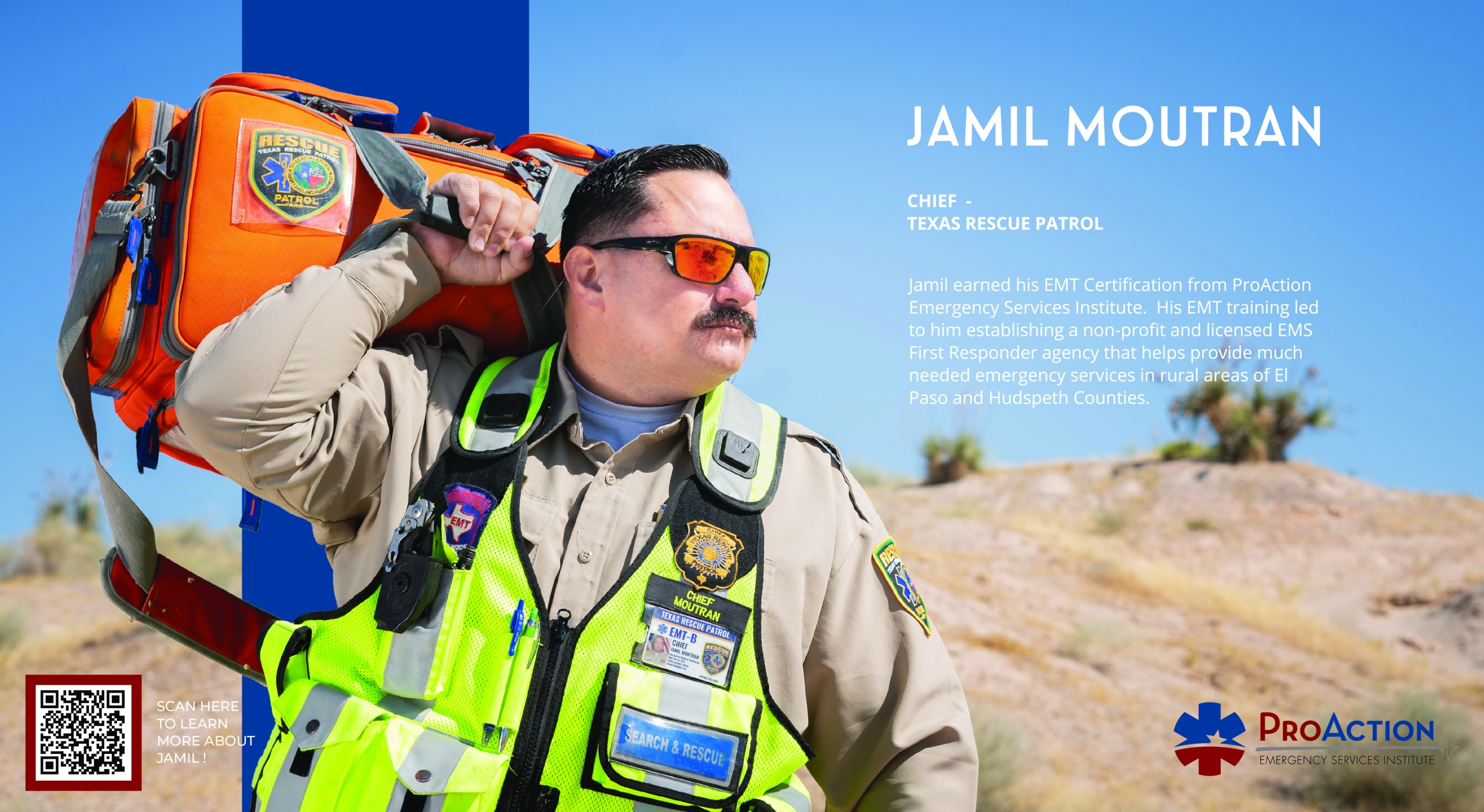 For Jamil Moutran, it’s all about helping others and ProAction Emergency Services Institute has been key to his achieving this goal.

Originally from California, Jamil moved to El Paso around the turn of the century. In 2017, he witnessed a traumatic motor vehicle accident. That event awakened in him a desire to become an Emergency Medical Technician so that he could help individuals like those involved in the accident. He enrolled at ProAction and earned his EMT Certification.  His EMT training led to him establishing a non-profit and licensed EMS First Responder agency that helps provide much-needed emergency services in rural areas of El Paso and Hudspeth Counties.

“I was looking for a good school where I could get certified as an EMT and after doing some research found out that there were a couple of schools available in the El Paso area,” he said. “When I investigated it further, one that really stood out was ProAction. I also talked to some friends and heard really good things about it.” Jamil said his training at ProAction was “really impressive.”

“They use the latest tools and technology and there was a lot of hands-on training – not just theory,” he said.

With his training complete, Jamil began to create the Texas Rescue Patrol, an organization which now has 60 volunteers and provides emergency services to residents in about 4,000 square miles of rural El Paso and Hudspeth Counties. He says it “fills in the gap” of what regular agencies can do by providing communities access to additional resources without spending tax-payer dollars.

The organization averages 550 calls per year for assistance and has saved many lives.  Their work includes helping local law enforcement, fire, and EMS agencies with motor vehicle accidents on rural roads and remote off-highway locations, assisting with emergency medical services in rural communities and coordinating with search and rescue operations.  The organization even has its own K-9 and drone team.

“We have extensive training in off-road environments and have access to equipment that can get into some remote rural areas that can’t be reached by traditional vehicles,” Jamil said. “We will go into these areas and stabilize patients, then properly immobilize them to prevent further injury. We then quickly transport the patient to the nearest easily accessible location where patient care is then transferred to next level medical care providers.

Jamil hopes to be able to expand the organization and has received inquiries from similar groups around Texas about how to set up a program like his.

It’s a lot of work, but in the end, well worth it.

“It’s been a blessing getting this program going,” he said. “We love helping people.”