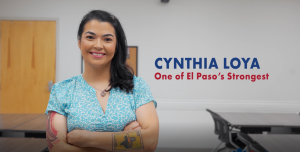 Cynthia was a first responder during the August 3rd tragedy in El Paso, Texas.

Imagine you are walking in the parking lot of a big-box store, planning to go inside for a quick stop at an ATM to get cash for an out-of-town trip. You suddenly notice a frantic scene with dozens of people crying and screaming. It appears that many have been shot. There’s a lot of blood. Some victims are lying on the ground in pain while others who are injured stand in stunned silence. You want to help, but the only possible medical aid you see is a shopping cart full of toilet paper and paper napkins. It’s all you have to work with.

This is the scene that El Paso resident Cynthia Loya found the day she went to an El Paso Wal-Mart on Aug. 3, 2019, when 23 people were killed and dozens more injured in one of the nation’s worst mass shootings on record.

But Cyndy had something else to help her deal with the horrible scene. She had the benefit of being trained by El Paso’s premiere Emergency Medical Services program – ProAction Emergency Services Institute.

“The shooting had ended just four minutes before I walked up to the front of the store,” she said. “It was too soon for any Emergency Medical Services teams to get to the scene. But everything just kicked in and I knew what I had to do.”

She had noticed the shopping card filled with toilet paper and paper napkins that she thought might be used to stop some of the bleeding..

“My instinct was immediately to try to manage the situation and create a make-shift triage where the table was,” she said.

“I tried not to focus on the evil that had happened and to manage the situation with the training I had received (from ProAction),” she recalled. “I had to stop the bleeding. I applied the toilet paper or napkins to the wounds using my bare hands to apply pressure and stop the bleeding. Of course, I had no protective gloves, which goes against all of the rules. But I had no other choice.”

Cyndy believes she treated about 10 people that horrible day.

“All of them except for one made it,” she said with a note of sadness in her voice.

Cyndy had gone through training at ProAction 14 years ago, receiving her EMT Basic Certification. She said what prompted her to get her EMT training was an experience with her newborn daughter.

“My daughter was really sick one day and she had to be transported to the hospital in an ambulance,” she remembered.
En route, she was impressed by the care her daughter was receiving from an EMT in the ambulance.

She picked ProAction after doing research on programs offering EMT training in the El Paso area.
“I wanted to do this quickly and ProAction was clearly the way to go,” she said.

During her training, Cyndy came to appreciate the fact that she was surrounded by dedicated professionals.

“You are surrounded by professional paramedics with so much experience that it would take you weeks for them to share all their knowledge,” she said. “I realized what I was gaining was a whole world of knowledge, not just a certification. They truly want you to succeed.”

After receiving her EMT certification, Cyndy went on to work at ProAction in training new EMT candidates. She moved to San Antonio, TX, where she worked as an EMT with an ambulance company. She returned to El Paso six years ago and now works in the environmental health and safety industry.

“I’ve been a health and safety professional in general industry, construction, aviation, and now Aerospace, she said. I think it’s important to mention that as that my EMT training (from ProAction) has helped me with opening doors to my safety career as well. “

She said her current work is an aerospace safety specialist with a prominent aerospace company. The work combines the knowledge she gained at ProAction to treat injuries along with a focus on preventing them.

She still holds her EMT certificate and just renewed it for another three years.

As far as her actions that day at the Wal-Mart, Cyndy says ProAction could not have prepared her any better.

“I think the combination of empathy – which all of my instructors drove in constantly – and a desire to help in difficult situations where what mattered,” she said. “My instructors hammered home that if you don’t have empathy in this job, you’re in the wrong field. It was that and a combination of having love for your community and its people that drives someone to do what I did that day.”

For those impacted by the August 3rd tragedy, assistance is available at the El Paso United Family Resiliency Center.